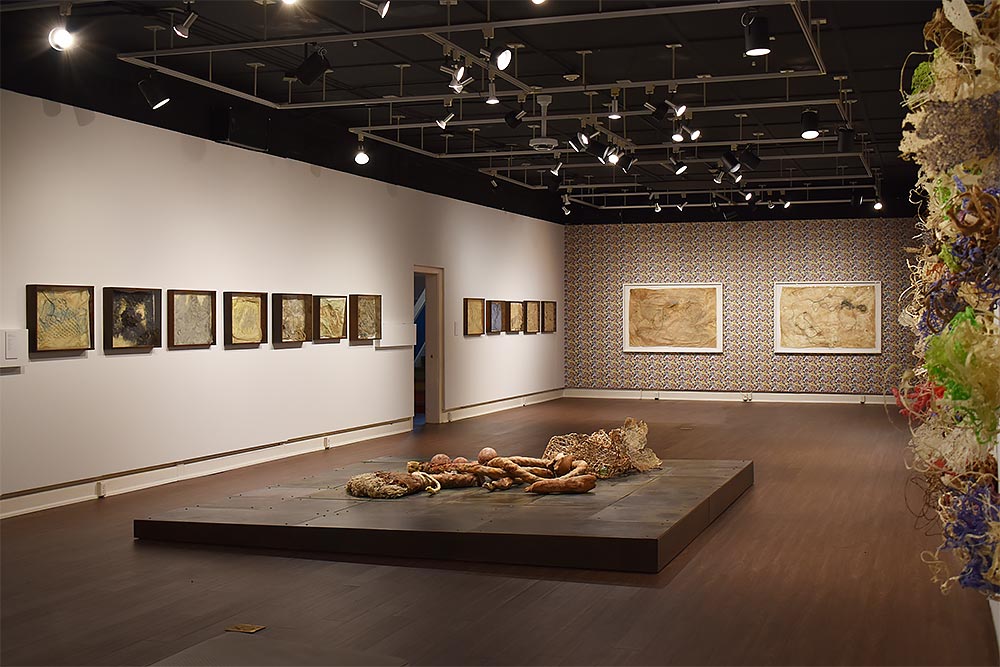 Our relationship to the sea is the foundation of my hybrid sculptures. This exhibition is a combination of the Gulf Project and a new body of work installed to create a polarization on the opposite walls of the galleries that depict Cause and Effect.

The Gulf Project is about the documentation of cause and effect and is a documentation of plastic in the Gulf in a series of steel frames (cause) that are opposite Going, Going, Gone (effect) about dying coral reefs. On one end wall The Dead Zone (cause) is a wall of wallpaper created from a collage of plastic detritus collected from Johnson’s Bayou and two large framed works encasing the actual plastic found on the beach hung on the paper. Beauty can hide danger. On the opposite end wall is Acid Ocean (effect) a twisting sculpture of algae like paper embedded with cast paper shells. The warming of the ocean is thinning the shells in the sea.

Hello Sailor, the floor piece is an island of nostalgia. Steel plates are etched with tattoos sailors would earn from sailing on the ocean. It slants much like a section of a hull of a shipwreck. On top of the steel are lines and traps and glass balls, detritus that was from the past when it was made from materials that would degrade after a time in the ocean before the influx of plastic. What used to be…….

I am also interested in collaboration and interaction with artists, politicians and advocates who share my passion about the sea and want to address the dangers of climate change. Poet Ashley Mace Havird wrote the poem about the exhibition that is below. She is also an avid diver and lover of the sea, many of her poems address climate change.

The Gulf Project was the result of two trips to the Gulf of Mexico. In June of 2011 I drove a “mobile studio” set up in an RV to the Gulf Coast to document plastic pollution in the ocean by encasing what I collected in handmade paper. I spent time in Johnson’s Bayou and Grand Isle, Louisiana. I returned a year later to continue the documentation on the coast. This exhibition is made with plastic collected during these two trips. The Gulf of Mexico is loaded with one of the highest concentrations of plastic in the world, putting it on par with the mouth of China’s heavily polluted Yangtze River. 90% of floating debris in the ocean is plastic. Unless it’s burned (which is toxic), plastic has no place to go but in the ground or in the water- this is a GLOBAL PROBLEM.

We are bound—the sea is sounding
with all of its contradictory voices.
Breeze-thrown seafoam hushing us.
Breakers spilling us into sleep.
Stampedes of storms that fail to wake us.
Sign language, then.
Dead zones, red tides, coral bleached to bone.
Whales—huge, confused, heaving ashore.
The language of desperation.

Our dreaming deepens
beneath our blankets of carbon, laced
with a killing fever; gorges on tributaries
rich with fertilizer, pesticide, industrial sludge.
We dream of taking.
Of dynamite and cyanide. Longlines
and trawling net, gill and tangle and drift net…
You are bound—the sea prods
with our leavings.

You are bound to me—casting and reeling
its tides, the sea now aims to hook
open our eyes, to save
us from our drowning selves. Forgives
as long as it can survive to forgive.