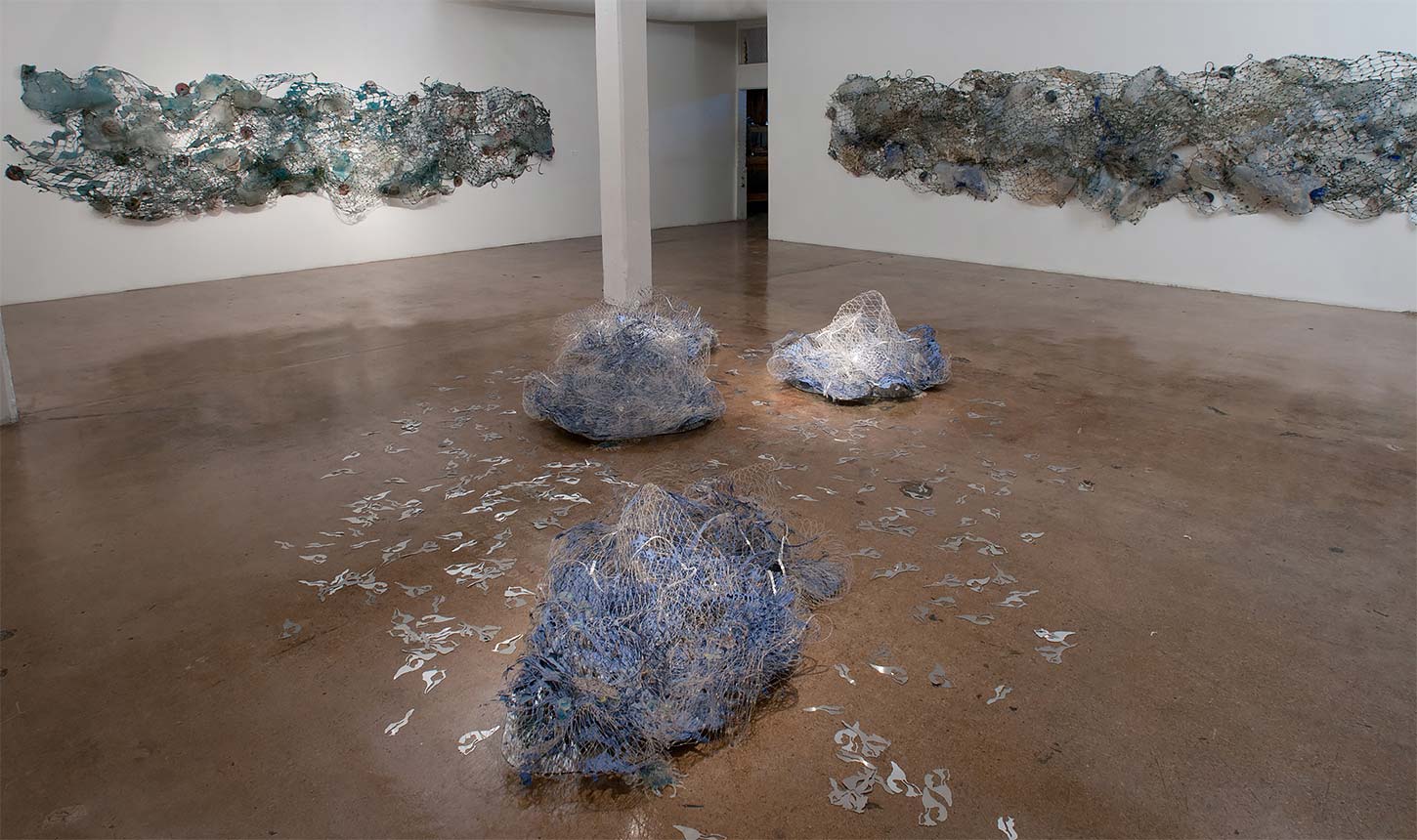 At first sight the works of Ivano Vitali and Joan Hall appear to address quite diverse aesthetic concerns.
Their working methods are notably different and include cutting with a scalpel for one, and careful
tearing for the other: active attack on the one hand and pensive consideration on the other (the viewer
can decide which is which). On closer observation, however, the crossovers of conceptual, technical and
formal elements allow the works to converse and converge on many levels. The obvious elements that
connect both bodies of work are paper—both handmade and recycled—and a means of construction
using intertwined and knotted lines to create their sculptures.

Joan Hall has long produced prints and sculptures created from handmade paper and her work brings to
mind the long history and flexibility of this beautiful medium. Combined with paper she also uses
discarded flotsam, frequently picked up on various beaches or found floating in the ocean.

Ivano Vitali creates objects from mass media paper, newspapers, journals, and the like. These “found”
papers are carefully fabricated into various threads and yarns, which become the basis for his sculptures.
His artistic work is closely linked to the historical Italian tradition of fine craftsmanship and the materials
are reminiscent of Arte Povera.

The work of both artists resonates with the metaphorical power and unexpected beauty of discarded
daily ephemera to visually communicate overlapping concerns about the fragility of our world, the
environment and the conservation of our planet.

Implicit natural phenomena such as water, wind, current and waves not only show my long fascination with the sea, but also portrays the permeability of human beings’ basic structure from part to whole; and the relationship of cell to body to planet; we are of and by the sea.

John F. Kennedy remarked on the inextricable bond between human beings and the ocean when he marveled upon the fact…”that all of us have the same amount of salt in our blood as exists in the ocean; we have salt in our blood, sweat and tears. When we go to the sea we are going back from whence we came.”

My work for the Blue Star Contemporary Art Center explores a darker side of my concern for the environment. Dying Ocean references the “Great Pacific Garbage Patch”, a floating island of collected plastic floating in the ocean said to be now three times the size of Texas (its size has always been compared to the state of Texas). The work is held to the wall by cast pins made with plastic collected from the beaches in the Florida Keys-both beautiful and deadly. Our wildlife is consuming it in the ocean at an alarming rate and 10% of all plastic made ends up in the ocean. Several more “floating islands” have been found in the world’s ocean. The floor piece, Here No More, are my own floating islands made from fishermen’s nets. The fishermen who gave them to me in the Florida Keys are no longer there, possibly due to the Gulf oil spill or development- but I can no longer find them. Ironically it sits over the residue from a memorial to a recent member of the Blue Star “family” who is no longer here.

Your Existence is Not Unlike My Own, is just that: like the sea our bodies are constantly changing, sometimes a natural one, sometimes not. Our coral reefs are dying at an alarming rate and we forget that the oceans are linked to the health of all of us that inhabit the earth. Horseshoe crabs are harvested and their blood, (which is blue), is used to detect dangerous endotoxins not eradicated by sterilization. Their blood is drawn and they are returned to the Chesapeake Bay. C1, C2, C3, and C4 reference ocean buoys, and the four points of the compass- the ocean warming is a worldwide issue.

I am an optimist and am a lover of the sea having sailed over 25,000 miles on it. If one sails out of the site of land it is an experience one never forgets. The ocean is so vast and beautiful and we are so small. Over the years I have noticed the deterioration of the waters I have frequented, and mankind has created this problem. My art is informed by this concern.