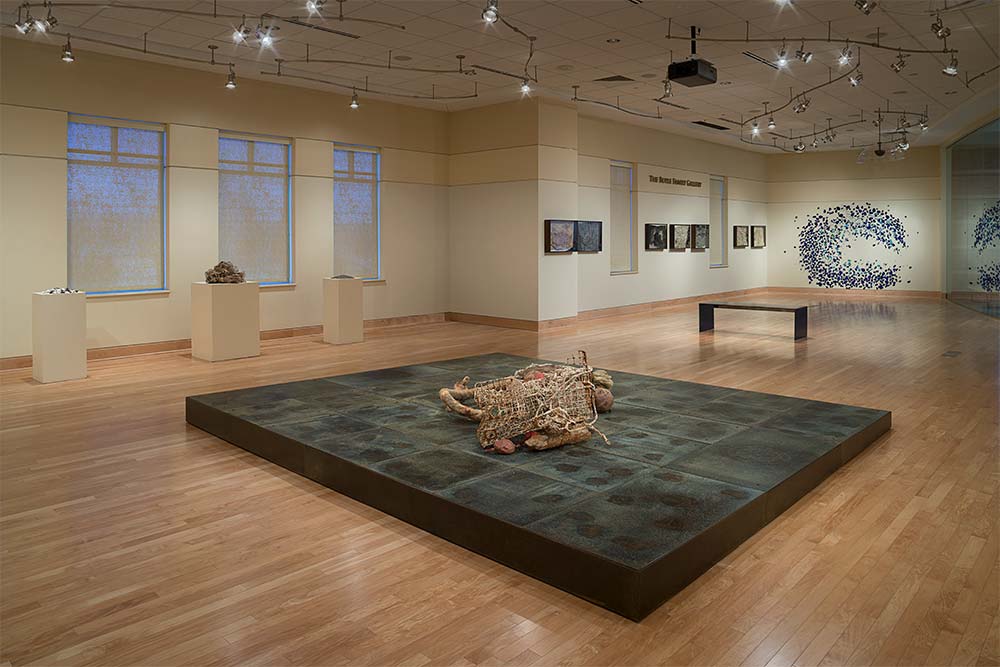 Our relationship to the sea is the foundation of Joan Hall’s creative works. Plastic is becoming a global problem, polluting our greatest resource–WATER. As an experienced sailor, Hall has experienced the vastness and the beauty of the ocean beyond the sight of land.

In June 2011, Hall and her studio assistant, Danielle Spradley, drove an RV to the Gulf of Mexico to document pollution on the coast of Louisiana. This “mobile studio” allowed her to integrate “field work” into her studio practice.

Near the Texas border in Johnson’s Bayou, plastic containers, rope, and gloves washed up on the shore each day from as far away as Haiti. They were combined with handmade paper to document, map, and freeze the pollution as relics of a specific time.

Grande Isle, located south of New Orleans, was opened just after the 2011 oil spill. Clean-up gloves filled with oily residue, hard hats, and plastic washed up constantly on the shore. The “black sand” left on the beach after a very low tide proved to actually be coagulant used to dry up oil in the water.

Newer works in the exhibition are a result of Hall’s continued research in the Gulf of Mexico, recently on Captiva Island, FL In 2014 while on the Island there was a huge storm from the Northwest.  The next morning walking the beach Hall found shells that were bleached out with a black edge- they were quite beautiful and unusual until she realized the black coloring was do to oil. It was said that BP was using a substance to force the oil to the bottom of the gulf- and 3 years later evidence was washed up on the beach.

The gulf project was funded in part by the Washington University in St. Louis, Sam Fox School of Design & Visual Arts

10% of all plastic produced in the world ends up in the ocean.

Crucial habitats are falling victim to the changing chemistry in the ocean.

Warm water coral reefs are dying at an alarming rate.

who inhabit the earth.

Like humans, the octopus is versatile, successful, and intelligent, but has no power, therefore no choice and no voice in shaping the overall future of the planet. WE DO.